In 1955, the western world was introduced to hallucinogenic mushrooms when R. G. Wasson was invited to participate in an old indigenous ceremony. Wasson went around Mesoamerica looking for this fabled mushroom as part of a study in ethnogenic plants. The mushroom was identified to be of the genus Psilocybe. 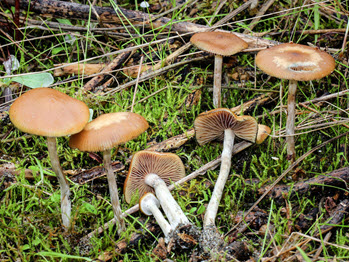 This was the most recent “discovery” of the mind-altering mushroom species, but psilocybe have a long and strong history with humanity that goes back thousands of years. Mushrooms have been a part of religious ceremonies and rituals all around the world and in interaction with many different cultures.

Here we find the earliest records of ceremonial use of Psilocybe mushroom. You are able to find rock art in the Sahara which is 7000 to 9000 years old, that presents mushrooms in the context of harvest, offering, and adoration. Pieces of art are found in Algeria, Libya, Chad, and Egypt. One of the most important depictions is on a site called Tin-Tazarift. The art shows a group of dancers, all in masks, holding out a mushroom-looking item with two lines running parallel from the edges of the mushroom to the dancers head.

The use of hallucinogenic mushrooms has a long history with the tribes and societies in the Mesoamerican area. The Psilocybe are used for religious communion, for healing ceremonies and to get closer to the divine. This was the case in ancient times and it is still the case today.

In Guatemala, you can find old depictions of mushrooms on stones and in Mexico, you can see statues dating back to 200 CE which looks a lot like the species Psilocybe Mexicana. We also know it from an old text that the Aztecs were accustomed to a mushroom they called “divine mushroom” or “genius mushroom”, which Bernardino de Sahagún, a Spanish priest and ethnographer, reported were used by the Aztecs when he traveled there in 1529. 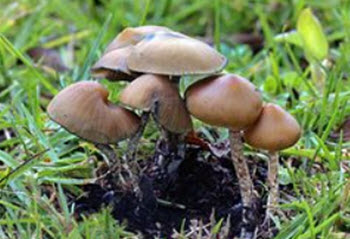 In the city of Villar de Humo, in Spain, you can go see some ancient rock art. This rock art offers us one of the earliest suggestions of psilocybe use in a religious context, as the art depicts old ceremonies and in them have depictions of what looks like Psilocybe Hispanica appear. This hypothesis is further backed by similar art in the Tassili caves of Algeria that depicts a similar mushroom in similar settings.

The use of psilocybe as a part of religious or magical ceremonies was also a part of the some of the pre-Christian European belief systems. The Psilocybe species “liberty caps” have been used in pagan rituals, again in association with healing ceremonies since old times, and were used by the witches to communicate with the spirit world for a variety of reasons.

Last I will introduce a theory which was put forth by the psychedelic philosopher Terence McKenna. The theory claims that the relationship between humans and the psilocybe mushroom was a spark to developing ritualistic behavior and religion. He theorizes that the mind-expanding properties of psilocybes helped our ancestors develop projective imagination, speech and philosophy and through that, develop early structures of faith and religion.