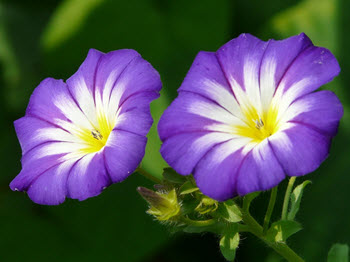 This beautiful plant is out of the Convolvulaceae family, also called the morning glory family. The Ipomoea tricolor is a vine-like herb which can become up to 4 meters in length (sometimes longer). The leaves grow around the stem in a spiral pattern and are up to 7 centimeters long. The flowers look like large, blue, flat trumpets with a yellow center, growing to 9 centimeters in diameter. The tricolor is an indigenous plant to Mexico and the southern parts of Central America.

The ingredient that makes the Ipomoea tricolor a sought after plant is LSA which is, as the name insinuates, a hallucinogenic in the same chemical family as LSD. LSA is seen as a medium strength psychotropic compound, with effects similar to LSD, but significantly more sedative and with a lot more physical side effects. The “symptoms” associated with tricolors psychedelic properties include; opened and closed eyed visuals (often geometrical), feelings of euphoria, a feeling of oneness and unity and heavy sedation.

The entire plant contains LSA, but the concentration is highest in the seeds. The shell of the seeds contain a variety of nauseating glycosides and because of this, many consumers of the seeds will vomit after consuming.

It can come as no surprise, considering where it grows, that the natives of Mexico have a long history of using the Tricolor in ceremonies and rituals. The plant was especially used by the Chontal Indians of Oaxaca and the ancient cultures of the Aztec and the Zapotec.

What is it used for

Throughout time this plant has been used in a large selection of rituals, all centered around communicating with higher deities. For the Aztecs, the deities were their sun gods. The Aztecs believed that the tricolor was able to open a portal to the realm of gods, in the same way as peyote or saliva, and was considered sacred or holy. The way the Chontals viewed the plant was similar but with a small variation. They still had the idea that the morning glory could connect the consumer with the gods, but not through a portal, through a highly evolved spirit dwelling inside the plant.

Interestingly enough many of the old rituals including tricolor follow the same agenda and uses a lot of the same procedures and symbols. First, a dose of 26 seeds is prepared by a shaman, and then the seeds are grounded into a powder by a young virgin, usually between the age of 10 and 15. The powder is then mixed with water to extract the LSA; the traditional explanation for this is it allows the seeds to speak. The mix would then be consumed by a priest of high rank, who would then enter the other realm. During the ceremonies, the priest would wear a headdress symbolizing power and divinity, an embezzled jaguar skull. It was believed that priests would be able the turn into a jaguar once the Morning Glory was ingested, which was necessary to be reborn as a shaman and to gain the ability to talk to the sun gods.