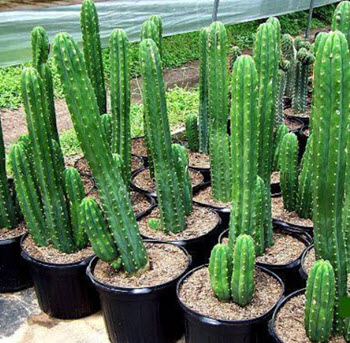 San Pedro or Trichocereus pachanoi is a fast growing, slender, tall and columnar cactus which can get up to 6 meters. The cactus grows mainly in the Andes in dry conditions and high altitude. San Pedro produces large white and pink flowers which turn into dark green fruits upon pollination. The Trichocereus pachanoi is the only one its family, which counts thirty species, with psychoactive properties.

Who uses and where

Given the limited area of where it grows the San Pedro cactus was mostly used in Peru. The use of the San Pedro goes back to ancient times and leads all the way into the present. If we look to Peru, which still have a tradition of using the cactus, evidence of use can be found in an old Chavín de Huantar temple. The temple contains stone carvings in which you can see a deity holding a San Pedro. This find dates as far back as 1300 BCE. And by going through more sites from the Chavín de Huantar archaeologists have found multiple artistic renderings of the cactus, such as more carving, textiles and pottery, and even what looked like a cigar made from the skin of San Pedro.

The cactus was usually administered by a shaman in certain rituals. They prepared the cactus for consumption by cutting it into small pieces, then boiling it for many hours turning it into a gooey liquid, which was then drunken after it had cooled off. Often the cactus drink would be accompanied by another psychoactive plant, such as coca, Brugmansia or tobacco. 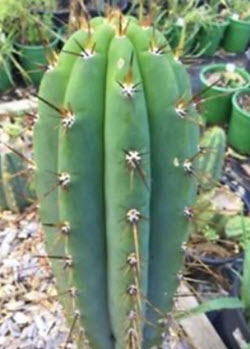 The effects of San Pedro

The effects of San Pedro come mostly from the compound Mescaline, the same compound found in the Peyote cactus. But the San Pedro contains more psychoactive alkaloids which all have a part to play in the experience. The effects will start to take a hold 1-2 hours after consumption and then continue for up to 15 hours. One of the most remarkable effects is that things and people seem to radiate light or energy in a visual tangible way. Other notable effects are the ability to recall lost memories and heightened sense of hearing, which makes one capable of perceiving sounds much further away. The emotions which are described during the “trip” are pleasure, fear, love and hilarity.

The cactus is used by shamans in rituals which are centered in nature. When used in these rituals first the cactus has to be blessed by the shaman before ingesting it. After the blessing the participants must present a gift or offering to San Pedro, such as perfumes, alcohol or special kinds of food. All of this is done to please the cactus spirit and allow you to travel safely in the spirit realm. The drink is then shared between all, in a single container that everybody drinks from. The ceremony is used for many purposes, and it depends on what the participants seek, common goals are addressing physical illnesses, revealing hidden enemies, seeking out love and to ward off evil spirits.