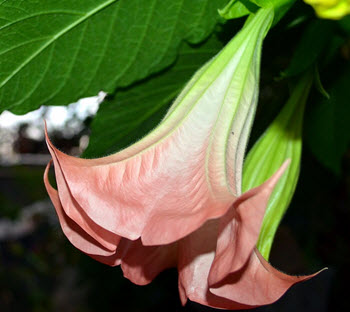 As night approaches Brugmansia, also called Angel’s trumpet, start letting out its intoxicating scent, this scent has captured people’s senses and attention around the world. The plant is out of the Solanaceae family and look like musical horns. The reason for the name Angel’s Trumpet comes from the flower being aimed downwards, resembling the angelic horns in tarot cards, which point downwards to awaken the dead. These feats combined with Brugmansias psychoactive properties have made it used far and wide in religion and as a component in different schools of flower sorcery and the occult arts.

Brugmansia originally comes from central and South America. Here it has been used for all sorts of occult purposes. One of the most famous occults uses must be as a component in “Devils Breath”. In this form, Brugmansia is known to take away the free will of the consumer. Stories of people emptying their bank accounts, people consenting to sex and even given up their organ, make this use especially scary. There are even stories of people being tricked into selling stock and other assets before emptying their bank accounts.  The folklore around “Devils Breath” claims it was invented by voodoo sorcerers and this could explain the zombie-like state these practitioners could lull victims into. It is likely that many stories are false, used as an excuse for extramarital affairs and poor business decisions.

In the Andes, it was used by priests to peer into the future and diagnose diseases. They would dry the leaves, mix it in with tobacco and smoke it, which would let them pass into the realm of the spirits, from where truth would be revealed to them. The Brugmansia is still used in this area. They use the seeds in the brewing of a maize beer which is drunk at festive events and spiritual rituals. 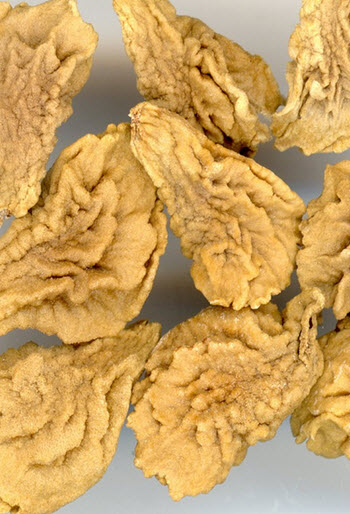 The incapacitating trait of Brugmansia was also used in Colombia. A maize-based brewage would be prepared after the death of an important person and served to their slaves and wife. This was done because according to their traditions those individuals had to be buried alive with their master. The shamans believed that by ingesting Brugmansia one could communicate with ancestors and guide the deceased into the next world.

Brugmansia began spreading out from South America around 1800. It made its way to North America quickly and was picked up shamans of the indigenous tribes. They took its psychotropic effects and its late-night fragrance as a sign of it being in connection with ancestral spirits, and they saw the shape of the flower as being meant to amplify their voices. One of the common uses of Brugmansia was brewing a tea which was served to unruly children. The logic behind this was that the kid could speak with its ancestors and through that interaction be set straight. Brugmansia was also used in smaller healing ceremonies, to relieve pain and remove inflammation

As Brugmansia spread out, it hit Hawaii in 1825. We know this was the year because they were brought over by the ship, Blonde, which came from Rio de Janeiro. The Hawaiians took in the plant and integrated it into their own lore. They renamed the flower “Nanahonua”, which means ‘gazing earthwards’, which again run along the lines of the name it was already given. The Hawaiians method of consumption is drying out the leaves and then smoking them, which initiates a hallucinogenic ritual.