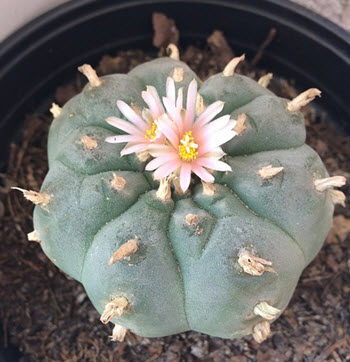 Lophophora williamsii is a cactus with no thorns which can grow up to 20 cm in height. The cactus usually grows singular, but can sometimes grow in small clusters and is covered in small hairs. Under the surface, the plant hides a big carrot-shaped root which can get up to 11-13 cm in length. the flowers of the Lophophora williamsii are a delicate pink color and become around 2 cm in diameter. The cactus grows in the desert areas of Texas and Central Mexico. When ingested the cactus is known to be hallucinogenic and induce alternate states of mind.

Who used it and Where

We know from archaeological evidence that people in what is now Texas used peyote as far back as 4000 BC. The same goes for northern Mexico, where peyote remains have been found that date all the way back to 500 BC and other remains where fund at a burial site that dates to 810-1070 AD. The reoccurrence of the cactus on all these sites indicates that peyote has been used in this area for different ritualistic behaviors long before history was written down.

It seems that the use of Peyote was spread through North America by the Lipan and Apache. They established the ritualistic use of the cactus in most tribes found on the Great Plains and it is now an integrated part of almost all North American native tribes. Because of the growth conditions of the cactus, the use of peyote is most common in the southeastern part of America.

The Aztecs could also have been using the cactus for their rituals. One of the best studied and most renowned peyote cults, the Huichol, have had their roots traced back to small tribes living in the northern territory of the Aztecs. To this day the Shamans of the cult go to a desert known as “realm of the dead” by the Aztecs, to seek out peyote which they believe to be the center of the universe that it created itself. Here they collect it to use later in all sorts of festivals and ceremonies.

The Effects of Peyote

The effects when ingested can be both cognitive and physical; here we will focus mostly on the cognitive. First of all the active ingredient in peyote is called mescaline, which has psychedelic effects comparable to LSD, Psilocybin, and DMT. The effects last between 8 and 14 hours depending on dosage. Some of the effects that set mescaline aside from the group are the way colors start to change, the way the consumer sees time and its passing and how one relates to other beings. These components seem to trigger a very deep form of introspection and a feeling of stepping outside oneself.

Many of the rituals which included the consumption of Peyote are described as communing with the gods or spirits. By many of its users, the plant was believed to be a spirit which granted passage to the realm of the gods/spirits. This communion was then used for different things, such as calling for blessing, healing of the sick or asking for foresight.