Datura stramonium is an annual bushy herb that can reach heights of 150 centimeters. The plant has a sturdy, yellow-green, and smooth stem. The stem branch out in a fork-like pattern, where every fork makes a leaf, a flower, and one more fork. Datura has pretty big leaves, that can become 20 centimeters long, are dark on the top surface and lighter underneath. Its flowers are shaped like trumpets, wear the colors of white and purple and release a very distinct fragrance. The plant is believed to be a native of Mexico.

The effects of Datura

The plant is described as having strong narcotic effects and comes with a mild psychedelic effect. Every part of the plant is active, but the seeds remain the strongest. When ingested in sufficient amounts the plant can induce delirium and mania in humans, to the degree that the consumer no longer seems to recognize reality from fiction. If not administered correctly fatal poising is very likely, and one should generally not ingest Thornapple if one is not capable of calculating dosages.

Datura has been used frequently in the region that housed the Huastec. Here it has been a stable of their magical tradition for a very long time. It is also pondered that the Yucatec Mayans used the Thornapple in religious practices since the name they gave it means “little plant in the direction of God”. The Datura also held a special place in the hearts of the Mixe people of Oaxaca. We also see the usage of Datura in North America by various indigenous tribes.

European witches also have a tradition of using Datura. The use of Thornapples in witches remedies have been found in Germany and Russia and are believed to have been derived from the gypsies. 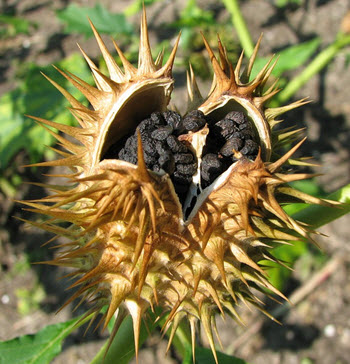 The uses of Thornapple are many. Let us first dig into the uses of Datura in Mexico. In Mexico the plant was used to ward off evil magic and its wielders, meaning it could kill witches and sorcerers. Mexicans would make an extraction of the Datura and cover their weapons in it, which would make them resistant to magic enable them to fight a wielder of magic. The Mixe of Oaxaca believes that the spirit of an old woman resides inside the plant and the Mixe word for Datura is actually translated into “grandmother”. This made them make small sacrifices to the flower when they harvested it. The Datura is also used in divination ceremonies in a similar way to psilocybe Mexicana. Furthermore, the Datura has a long tradition of being used as a prophetic and oracular plant. The Mapuche used it to treat mental illnesses caused by evil spirits.

In Europe the witches used it for making ointments used in rituals, to call upon the nature spirits. It was even brewed into beers to make it easier to consume and therefore enhancing its effects. The European gypsies used the Datura in similar ways to the Mexicans and used it as an oracular plant, but mostly to predict weather patterns.