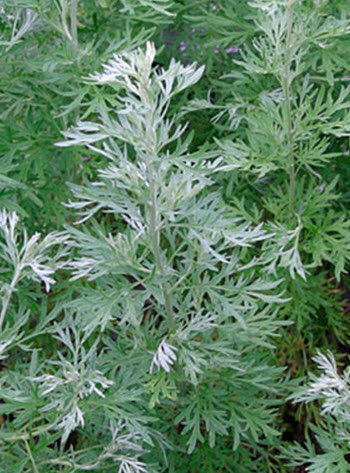 The Artemisia absinthuim is a herb-like perennial. The plant grows up to 1,5 meters in height and it has a green and silvery straight stem with grooves. Its leaves sit on the stems in a spiraled fashion and can grow to 25 cm in length; they have a grey-green upper site, are whitish underneath and they are all covered in white trichomes. The flowers look like small tubes which are clustered together and they are a pale yellow color. The plant is native to northern Africa and Europe.

The plant gets mentioned in both the new and old testament a few times. In the Old Testament it is in relation to bitterness, with no metaphysical meaning, but in the New Testament, wormwood is mentioned as an angel or a star which turns water bitter. It is believed by various religious figures that the mention of wormwood is a metaphor for the invading Hun army lead by Attila, others believe it is a representation of the emperor Constantine, who did not accept the “Original sin” doctrine.

The plant has been used by lots of different groups of people in Europe and not just by absinth brewers. To witches around Europe, the Artemisia has been a stable of their ceremonial herbs and used for all sorts of occult practice.

The effects of Wormwood

Wormwood is in a group of psychoactive called mental stimulants. With a few more words the effect can be called narcotic, anesthetic, soothing and relaxing. When wormwood is combined with alcohol, as is the example with absinthe, it can induce quite vivid hallucinations. In smaller doses, wormwood can be used as a remedy against the flu, rheumatism, and tapeworms.

The active compounds in wormwood are the essential oils, anabsinthin, absinthin, resin, and organic acids. These are the same components which give taste to the legendary drink absinthe.

Wormwood is seen as a magical plant in certain cultures, it represents the planet Mars and the elements fire and air. One of the rituals suggest the plant gets soaked in wine for a few days and then ingested, this is said the help astral projection, induce visions and aid in divination ceremonies. Another magical application of wormwood is as an additive to magical sachets, which protects the carrier of the sachet against accidents. Wormwood is also used for countering harmful spells and to cast spells of vengeance. Furthermore, it is said to aid in calling upon the dead, if combined with Mugwort and then burned.

Besides magical purposes, wormwood is also used for healing. As a preferred herb of the ancient healers and today’s herbalists, it is among the standard herbal pharmacy. It is praised for its versatility with uses that include killing intestinal worms, calming stomach pains, helping with gas and indigestion, kidney stones, fevers and liver disorders. Wormwood can also stimulate hunger, which is why it is used in many aperitif bitters.

Ingesting Wormwood can be dangerous and should not be done without advice from a medical professional.